Sea-levels may rise substantially above 1 or even 2 meters during the 21st century. To what extent will coastal societies be able to adapt? Following the headlines, one easily gets the impression that sea-level rise will simply wash away coastal cities and small islands. While these risks are real, the picture is incomplete because it lacks consideration of adaptation.

The ability of societies around the world to adapt to 21st century sea-level rise (SLR) is more likely to be dependent upon social factors, including finance, than technical capabilities. That’s the conclusion I came to with an international team of researchers and addressed in a paper published this week in the journal Nature Climate Change.

My team and I had a closer look in a set of case studies, including Bangladesh, Catalonia, Ho Chi Minh City, The Maldives, New York City and The Netherlands, and found that the ability of coastal societies to adapt is mainly determined by social rather than technical challenges.

Generally, engineering technology is available worldwide for protecting coastal societies even against 2 meters of sea-level rise. For densely populated coastal areas and cities this is even economically favourable: protection is much cheaper than doing nothing and suffering damages through coastal floods.

What makes coastal adaptation difficult is the lack of access to finance and conflicts of interests amongst the diverse users of the coastal zone. For example, in Bangladesh, Ho Chi Minh City and New York City it’s difficult to mobilize sufficient financial resources for adaptation, even though adaptation is economically favourable. Furthermore, in many cases my team found conflicts between coastal communities receiving public support for adaptation and those paying for this through taxes.

The core challenge concerning adaptation to sea-level rise is not whether we can technically adapt, but rather how much this will cost, whether societies are willing to finance these costs and are able to settle conflicts amongst homeowners, tourist operators, nature conservatives and risk managers, all of which have different interests in how to further develop the coastal zone.

Given the maturity and widespread use of coastal protection technology, these findings are likely to hold beyond the cases studied here. Coastal societies have a long history of adapting to environmental change and local sea-level rise because coasts are amongst the most dynamic environments on Earth. For example, a number of coastal mega-cities in river deltas, such as Shanghai, Bangkok and Tokyo have experienced, and adapted to, relative sea-level rise of several meters caused by land subsidence during the 20th century.

These finding, however, should not be interpreted as an all-clear signal. Less densely populated and poorer regions of the world will not be able to afford coastal protection. Sea-level rise will widen the gap between the rich and the poor. While urban and richer areas are likely to continue to have engineered coasts protected against sea-levels, poorer and more rural areas will struggle to maintain safe human settlements and will eventually retreat from the coast. Such retreat is likely to involve massive social conflict, forcing societies to address difficult questions concerning transfer payments, compensation and liability for loss and damage.

Looking beyond 2100, the situation may get much worse.

Even if we would stop emitting greenhouses gases today, sea-levels will continue to rise and eventually be 1 to 2 meters higher. If emissions continue to rise we may experience sea-level rise of more than 1 meter per century, accumulating to tens of meters of sea-level rise over thousands of years. Even if protection would remain technically possible this raises difficult questions about lock-in and residual risks – failure would be catastrophic. Strong mitigation efforts are needed to reduce the risks of such high-end sea-level rise. 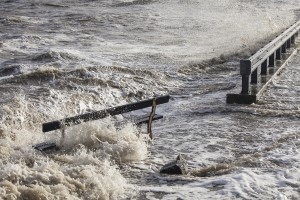